Water resources in Vietnam are quite diverse, comprising both natural and artificial water bodies. The countries water resources are under increasing pressure from over-exploitation due to increased irrigation demand, urban and industrial development, as well as concentrated areas of increasing population. 1 Ensuring national water security is a top priority for the national government, who is attempting to respond to a range of trends and challenges in water management, with respect to: 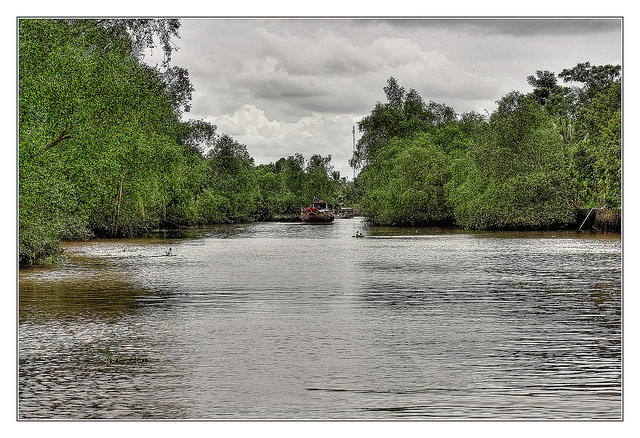 In 2012, Vietnam was reported to have a total per capita renewable water resource availability of 9,560 m3, which was above the international average of 7,400 m3.3 However, as over 60% of water resources in Vietnam are sourced from upstream trans-boundary sources, the total internal renewable per capita water resource availability in 2012 had declined to 4,000 m3. This figure is predicted to further decline to 3,100 m3 by 2025, resulting in greater dependence on relationships with countries upstream of Vietnam.4

Vietnam’s primary water supply is sourced from surface flows captured by rivers and aquifers. The two largest of these flows come from the Red River and Mekong river, which are known locally as the Hong River and Cuu Long River, respectively. Groundwater resources have increasing importance in Vietnam as well, particularly in the mountainous regions to the north of Vietnam, the central highlands, as well as the Mekong Delta region, where dry-season water scarcity has become an important issue. The  marine and coastal resources, within the territorial boundaries of the Socialist Republic of Vietnam are also important to Vietnam for the access to fisheries, ecosystem services from mangrove forests and transportation. In recent years, small amounts of snow has also been observed in mountainous areas in the north.5

Source: Department of Water Resources Management, Vietnam. These figures are current for the year 2015.

Of increasing importance in Vietnam is the distribution of water resources to meet the needs of ecosystems, as well as fulfilling human demands for water. The 16 major river sub-basins in Vietnam, 60% are concentrated around the Mekong Basin and 16%  from Thai Binh Basin.6  Annual rainfall ranges from 700-5,000 mm in Vietnam. The number of rainy days per year is highly variable, ranging from 60 to 200. This is unevenly distributed.7 Sloping terrain plays an important role in water distribution in Vietnam with northwest to southeast axis concentrates surface water in the southeast, where all major river basins are located, leaving the more mountainous areas in the north, with less available surface water. For example, despite the significant volume of water resources in Vietnam, some coastal areas in Quang Binh and Binh Thuan provinces experience arid conditions, where soils are subject to local desertification. In these provinces about 419,000 ha of land has been affected along with 43,000 ha in the Mekong Delta region. 8

In Vietnam, the Law on Water Resources (1998, revised in 2012) is used as the basis for water governance in Vietnam, including the use of surface water, rainwater, groundwater and sea water. However, a range of factors, such as deforestation, mining, hydro-power dam construction, and climate change significantly impact both the quality and quantity of water resources available to Vietnamese people and their usefulness.9

The law makes provisions for the National Water Resources Council (NWRC) and local river basin organizations (RBO’s) in major basins to manage these issues across different government sectors in Vietnam and protect water resources in line with the Law on Environmental Protection (2005). However, in 2013, the water sector was reported to still be affected by fragmented governance and poor co-ordination. Furthermore, while water pricing has been implemented in Vietnam, it is under-valued and does not effectively encourage its efficient use, particularly by agriculture sector, which accounts for 82% of water use in the country.10 This has broader implications when considering trade-offs, regarding the full range of human needs for water and meeting the UN Sustainable Development Goals (SDGs).

In 2016, Vietnam’s population had reached 92.7 million people, which means that although significant improvements in the provision of water supply, sanitation, and hygiene services to the population have been made, substantial numbers of people still lack access to basic services. For example, in 2015, 8.2 million people still lacked access to ‘basic’ access to a water supply that does not involve more than a 30 minute return journey to access clean water and 20.3 million people lacked access ‘basic’ access to sanitation services, which enable separation from fecal waste.11

As Vietnam has a higher population density than other Mekong countries, the volume of untreated wastewater and fecal sludge that is produced represents a severe environmental and public health hazard, and a major challenge to manage given other water resource challenges such as water scarce regions, climate change and sea-level rise.12 For example, in 2015, to meet the Sustainable Development Goals, the total cost for Vietnam to extend ‘safely managed’ water supply services to those without this access was estimated to be US$1.39 billion; while to do the same for ‘safely managed’ sanitation services was estimated at $US898 billion.13

The coverage of WASH services in Vietnam is not equitable, affected by income level, ethnicity and geography. For, example, the following data visualization shows the contrasting water and sanitation service provision situation for urban and rural and rich and poor contexts. Regionally lower service levels are experiences in the Mekong Delta as well as northern and central highlands regions. The latter are home to a high proportion ethnic minority households.14

Gender and water are both cross cutting issues for the sustainable development of Vietnam. To comply with the Law on Water Resources, which states that water resources in Vietnam are owned by the Vietnamese people and are managed in a uniform manner by the state to ensure that all people benefit, it is important to consider the risks associated with the use of water and how they are experienced differently by different genders.16 For example, nearly 65% of households in Vietnam lack a water source on premises, and the role of collecting clean water is primarily a responsibility of women and girls, a figure which is 10% higher among ethnic minority households. Furthermore, although women are still the major domestic users of water, they are less likely to participate in decision making on either domestic or public water supplies.17 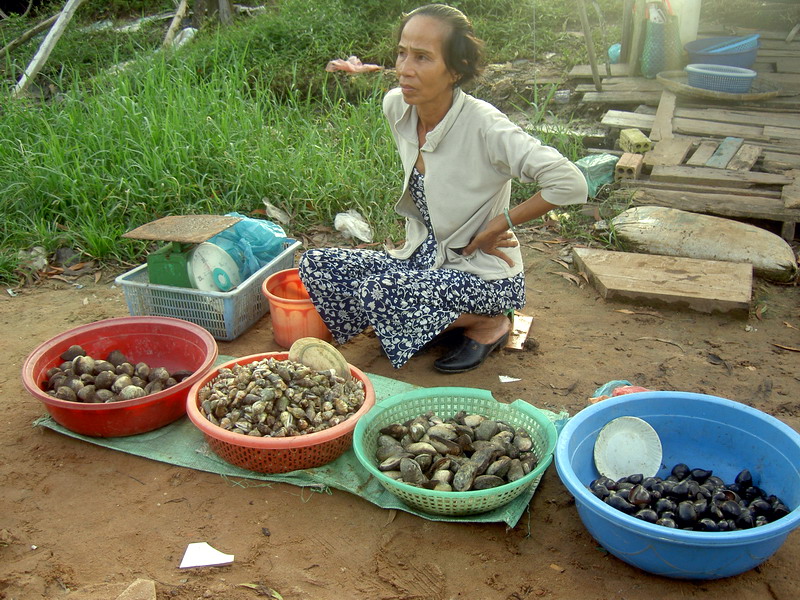 ‘Sale of shell fish by the roadside, Phu Quoc’ by ntt (Own work) GNU Free Documentation License or CC BY-SA 3.0, via Wikimedia Commons

Furthermore women represent 60% of the agricultural work force, whilst owning only 9% of land resources, as well as representing 80% of aquaculture workers in Vietnam. As these roles are highly dependent on natural resources, women are exposed to the risks associated with climate change much more than men and thus are the most affected by natural disasters. Women are also often restricted by their domestic work from participating in decision making processes and voicing their knowledge about these impacts and have less capacity to address these problems because of this.18 These examples highlight the importance of understanding water scarcity problems in Vietnam from a gendered perspective if they are to be addressed effectively.