All land and the natural resources found under or on it is owned by the people through the state in Vietnam.1 However, the state recognizes long-term, alienable usage rights over both land and resources.2 Those with these usage rights in forest land are known as “forest owners.”3 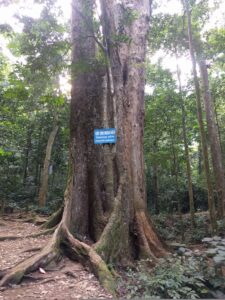 Tree in a national park. Photo by TomFitzhenry via Wikipedia. Licensed under CC BY-SA 4.0.

Land is classified according to its present use and/or the use deemed optimal. Agricultural land is one classification, and includes three forest categories: Special use Forest (rừng đặc dụng)) such as in national parks and nature reserves; Protected Forest (rừng phòng hộ) maintained for environmental purposes, such as watershed protection; and Production Forest (rừng sản xuất) used for production of timber and other forest products. 4 Each category has different rules about who can be given usage and management rights, and what uses are permitted. Special use Forest has the greatest number of protections, followed by Protected Forest.

For planning purposes, Vietnam also recognizes various other ways of classifying forests, including by origin (natural or planted), according to site conditions, and according to species 5

One crucial feature of forest governance in Vietnam is that a national level ministry (the Ministry of Agriculture and Rural Development or MARD) and local administrative units share primary jurisdiction over forests. MARD is responsible for developing national forestry plans which guide decision-making on forest uses.6 It also is responsible for requesting that the Prime Minister establish new Special use or Protected Forests of national importance.7 However, provincial and district People’s Committees can also establish forests that are not of national importance 8 and play the potentially much more significant role of allocating usage rights for all types of forest, as described below.9

Change of forest category and Conversion of forest to other use

The Law on Forestry allows for reclassification of forest land from one type to another or as non-forest.

This law also gives the power to convert the use of forest variously to the National Assembly, the Prime Minister, and Provincial People’s Committees, depending on the type and size of forest.11 While the law provides that conversion of natural forest to other use should not occur except “for important national projects, projects for national security purposes or other urgent projects approved by the Government,” this does not provide much guidance. Commentators have cited MARD as stating that provincial People’s Committees have often not followed land-use plans when re-classifying forest.12

Use and Management Rights

Under the Forestry Law, Provincial or District People’s Committees can designate forest usage and management rights via a “levy free” assignment or by lease13 to the following persons and entities:14

* If for commercial purposes, required to take the form of a lease.15

MARD and Provincial People’s Committees are both tasked with developing procedures to determine a fair price of forests before they are leased.17

Among the economic organizations who can obtain forest rights are State Forest Enterprises (SFEs). In 1986, there were a total of 413 SFEs nationwide; after a 2003 reform, the number reduced to 164 in 2014.18 These enterprises controlled a total of 6.3 million hectares of forest land in 1986.19 By 2015 that number was roughly 1.45 million hectares.20 Forest management boards are far more prominent today, controlling roughly 4.9 million ha. 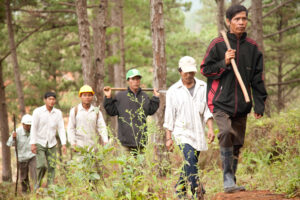 Moreover, some community members complain that the land they are allocated is of poor quality, inaccessible from their villages, and/or entirely lacking in existing tree cover, making it next to impossible to earn a sustainable livelihood from forest management alone. SFEs, in spite of their recognized inefficiency, have been able to keep much of the best forest land for themselves.23

Vietnam was the first country in Asia to mandate payment for ecosystem services at a national level.24 Governmental Decree No. 99 of 2010 provided the framework, mandating that users of ecosystem services pay owners of land or resource usage rights providing those services. As of 2014, implementing regulations had established procedures for payment to owners providing watershed protection and landscape beauty protection services.25 State-run Forest Protection and Development Funds at the national and regional level collect payments from users of these services (such as water utilities and hydropower plants) and disburse payments to providers of the services. According to official reports, between 75-80% of revenues collected were distributed to service providers in 2012-13.26 Observers noted these positive developments but also that payments appeared to be too low to compensate forest owners for the opportunity costs of not clearing forest.27

There are multiple sub-types of Special use forest, and the permitted activities vary slightly among them, as well as between the various zones in a Special use Forest. Generally no timber harvesting except salvage “fallen” and “dead” timber is allowed in service administrative zone of Special use Forest.28 Gathering of non-timber forest products on a sustainable basis and according to plans approved by MARD or Provincial Committees is allowed.29

“Buffer zones” which are established along the boundaries of Special use Forests are meant to reduce pressure from local communities on the strictly protected and ecological restoration zones.30 While the exact activities permitted in these zones are not clearly spelled out, they would seem to include grazing 31 and “investment activities.”32

Under regulations implementing the Law on Forest Protection and Development (the 2004 predecessor to the Forestry Law), timber harvesting is legal in protection forests with the pre-approval of the pertinent state agency or body and as long as it does not reduce canopy cover below 60%.33 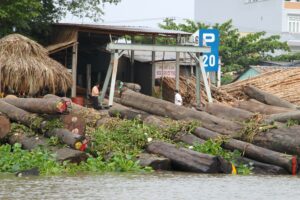 River side timber yard in Can Tho, Mekong Delta, Vietnam. Photo by Richard Allaway via Flickr. Licensed under CC BY 2.0

Non-timber forest product collection is also legal under this regulation, as are hunting or fishing, except for endangered and other designated species.34 Finally, eco-tourism and agroforestry operations that do not impair the forests’ functioning in their roles of watershed management, soil stabilization, etc., are legal.35 The ongoing applicability of this regulation under the 2017 Forestry Law remains to be seen.

Permitted activities in Production Forests must support their intended purpose or providing sustainable timber harvests. According to the 2006 regulations, the Prime Minister set the annual allowable exploitation, with MARD then approving quotas by province. Provincial and District Committees were responsible for overseeing timber operations to ensure they complied with those quotas.36

One significant distinction between households/individuals and economic organizations when it comes to natural production forests under the 2017 Forestry Law is that economic organizations are allowed to prepare a sustainable forest management plan, have it approved by the competent state authorities, and then harvest forest products (including timber) according to that plan. Households and individuals on the other hand must have each harvest approved by the district People’s Committee.37

Vietnam signed a Voluntary Partnership Agreement (VPA) with the European Union that entered into force in June, 2019. The VPA and its implementing regulations contain obligations for both the Vietnamese government that pertain to all timber operations in the country and to private companies wishing to export to the European Union. 38

Exporters from Vietnam to the EU must ensure the legality of their timber sources by checking for the appropriate documentation, with heightened requirements for imported wood.40

The Core of the TLAS is the “Legality Definition”. This definition is meant to ensure that every aspect of the production of timber exported to the EU complies with Vietnamese laws. The definition is summarized by seven principles:

These principles are fleshed out through criteria, which differ slightly for households/individuals and organizations. Each criterion is assigned corresponding document(s) called verifiers that prove it has been met.41 A system of supply chain control is specified that identifies key control points where checks on legality will occur.42 Finally, “FLEGT Licenses” will be provided for exports of timber to the EU that are found to comply with the above principles.

In September 2020, the Vietnam Government has issued the Timber Legality Assurance System Decree (VNTLAS), implementing legality assurance aspects of the FLEGT VPA. The decree, however, is assessed by Vietnamese NGOs in forestry sector as unmet the FLEGT-VPA standards regarding scope, participation, the interests of vulnerable populations, and sustainability.