Land in Vietnam is divided into extremely small parcels by world standards. The average agricultural landholding is 1,560 square meters per capita, which is less than one-third of standard holdings in Thailand or Cambodia. Up to 70% of rural households have land use rights to less than half a hectare of farmland1, which is barely enough to sustain a subsistence livelihood. In many parts of the country, an average-sized farm is not insufficient to enable a household to reach above the poverty line.2 Prior to 2013, the legal limit for an agricultural landholding was 3 hectares per household.3 However, the new Land Law, varies the maximum allocations of land to between 2 and 30 ha, depending on the location within the country.4 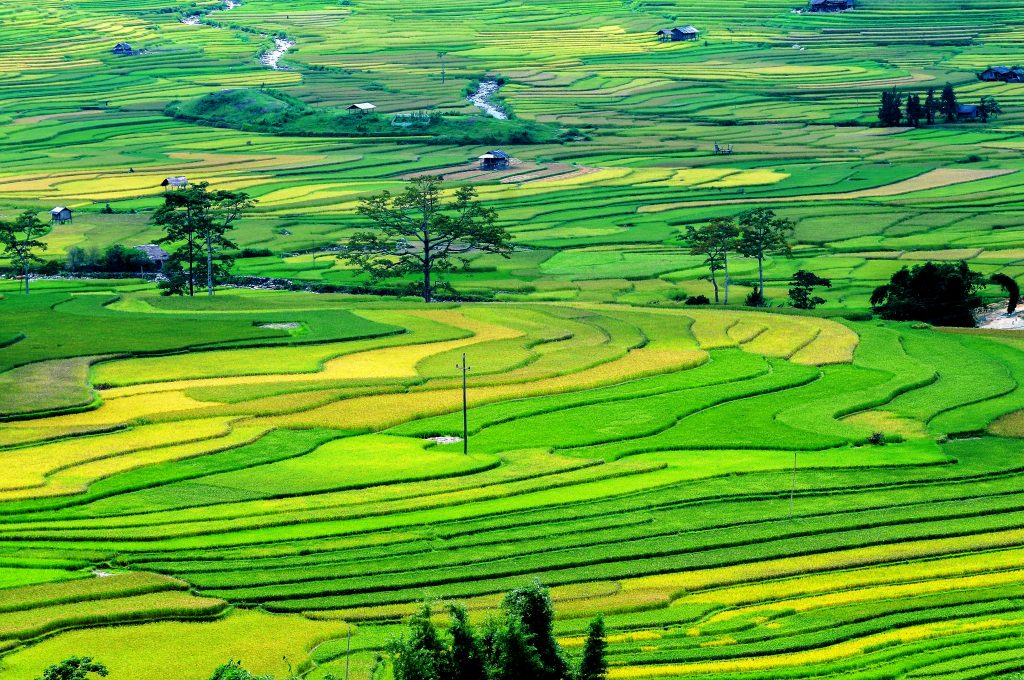 The landholdings of many rural households are subdivided into multiple plots, often located some distance from each other. The average farming family possesses 5 to 7 discrete plots, often with variable soil quality, at an average  total distance from the household of 4.7 km.5 This fragmentation of land parcels is the result of a range of historical, cultural, and economic factors.

Most agricultural and forested land was allocated to households either during or before 1993 as part of Vietnam’s Đổi mới reforms. Since that time, some land parcels have been split through the inheritance by children, while other parcels have been traded, or re-allocated hen the existing owners have migrated, become deceased, or return the land to the state6. Furthermore, as many as one million Vietnamese have been displaced from the land allocated to them through the reforms due to conversion to other land uses since the year 2000.  In many of these cases, the only land available to resettled communities have been fragmented parcels surrounding land plots that had been previously allocated.

Economists consider land fragmentation to be a key factor limiting the productivity of Vietnamese agriculture. They argue that if landholdings were consolidated into larger-scale farms, farmers would be able to apply more capital-intensive technologies, save time, and better organize more productive value chains.7

Internationally, there is contradictory evidence regarding this argument. In what has been termed the “productivity paradox”, small-scale farms have been shown to be more productive per hectare than larger farms.8 However, more developed countries typically feature larger farms with lower labor inputs and it is likely that labor force participation in the agricultural sector will continue to decline in Vietnam as it has done in other countries with improved development outcomes9.

The Vietnamese Government has responded to the issue of land fragmentation through a program of land consolidation (dồn diền đổi thửa), a model of developing large-scale fields (cánh đồng mẫu lớn), the National Targeted Program on New Rural Areas (Nông thôn mới), and efforts to support new forms of agricultural cooperatives (hợp tác xã nông nghiệp kiểu mới). The land consolidation program works by encouraging land users to exchange land parcels with each other to promote more efficient agricultural production10 Large-scale fields are formed when farmers with more land purchase or rent additional land from poorer farmers. Whereas, in the co-operative model, different households collectively contribute finance and land to produce agricutural outputs based on a shared plan.11 Research conducted on land consolidation suggests that while some farmers are satisfied with these programs, others, perhaps a majority in some areas, feel they have been coerced into participating.12 The government consolidation program has been criticized for being applied inconsistently and involving corrupt practices in its implementation. 13.

Other forms of land consolidation have been driven by business interests. The promotion of public-private partnerships in agriculture is a central tenet of Vietnam’s New Rural Areas Development strategy.14 State-owned, private, and foreign-invested companies have created large-scale field models by working together with farmers who enter into joint production contracts or lease land use right certificates (LURCs) to businesses. In some locations, local governments play an enabling role through supportive policies. Where successful, these farmer-market linkages can benefit all participants; in other cases, companies pass economic risks onto farmers, putting them at risk of losing their land.15 The key variable determining farmers’ benefit or harm appears to be whether or not they are able to keep hold of their LURC, or “red book”.16

Vietnam has few cases of large-scale land concessions (termed as “tô nhượng đất đai”) to agribusinesses. In Nghệ An province, the provincial government is supporting a US$1.2 billion agro-industrial project which will ultimately require 11,000 ha of land and could displace up to 44,000 people. The first stage of the project was implemented on 2,500 ha belonging to eight different state agricultural enterprises. Individual farmers who were leasing land from the state farms did not possess LURCs and thus received no compensation when the project began.17 In such cases, land consolidation takes place with an absolute loss to small-scale farmers.

Market-based efforts on land consolidation have been more effective in increasing farm size in southern compared to northern Vietnam, while government land consolidation programs have had more impact in the north.18 As a result of the mixed effects of consolidation efforts, debates about agricultural land use continue to be a central topic in Vietnam’s economic rise.