The role of agriculture in Vietnam

The agriculture sector plays a crucial role in Vietnam’s economy and society. In Vietnam, the sector includes crop production, livestock, fisheries, and forestry. Vietnam’s tropical climate, fertile soil, abundant water supply and rich biodiversity means that after 40 years of Doi Moi economic reforms, the country has developed a diverse commercial agriculture sector to meet domestic and global demands.1 At present, a comprehensive restructuring program is being promoted as the sector stands at a crossroads of both opportunities and challenges.2

In economic terms, the agriculture GDP accounts for about 13.96% of the total GDP in 2019.3 However, this number reflects a constant decrease from 38.06% in 1986,4 showing a deep transformation of Vietnam’s economy. In the period of 2001 – 2013, the agriculture sector growth rate was 3.57%/year, higher and less volatile than in other Asian countries.5 From a country threatened by hunger, Vietnam now ranks 2nd in Southeast Asia and 15th globally in agricultural exports.6 The export turnover rocketed from 4.2 billion USD in 20047 to 41.3 billion USD in 2019, accounting for 15.68% of total national exports.8 Vietnam’s leading export products are rice, coffee, pepper, tea, cashews, rubber, cassava, aquatic products, and furniture.9 The main export markets of Vietnam’s agricultural products are China, EU, the US, ASEAN, Japan, and South Korea.10

In social terms, the sector helps to ensure national food security11 by supplying sufficient food for the population of 96.48 million people.12 This is primarily through rice, which is the dominant food staple.13 Vietnam’s per capita food availability14 ranks among the top for middle-income countries.15

The agriculture sector has historically been a major employer of Vietnamese people, employing 65% of the national workforce in 2000. However, in recent years this has dropped significantly, to 47.4% in 2012 and 39.4% % in 2019.16 Yet almost 50% of rural households in 2016 reported that their main source of income continues to be from agriculture, although this reliance is a decrease from 68% in 2006.17 Agriculture transformation contributed to poverty reduction in rural areas, reflected by increased income from non-crop cultivation, especially among ethnic minorities.18

The agriculture sector also accounts for a large proportion of natural resource use, such as land, water, forest, and other raw materials, much of which has otherwise been reallocated to urban and industry development. 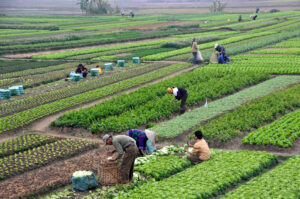 As a result, the agriculture sector has contributed to the socio-political stability, industrialization and modernization of Vietnam in the past 40 years, especially by acting as a safety net for the whole economy during times of crisis.19 The agricultural sector continues to perform this function during the 2020 COVID-19 pandemic, including through the distribution of food to the poor and unemployed,20 stabilisation of consumer prices, provision of alternative employment, and generation of export revenues.21 ADB projections indicate that Vietnam’s economy will continue to be the fastest growing in Asia despite the impacts of COVID-19.22 However, Vietnam’s most vulnerable, particularly migrant, informal workers and women,23 as well as ethnic minorities living in rural areas will be the hardest-hit by this pandemic. The government has developed a COVID-19 support package for vulnerable populations,24 but only those who are recognized by the government. 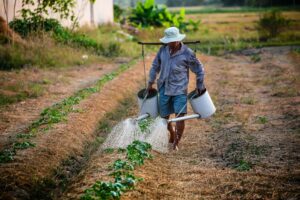 A farmer is watering plants. Photo is licensed under Creative Commons CC0.

Growth in the agricultural sector so far has been attached to a strategy of pushing agricultural growth through expanding in area, increasing numbers of crops, exploiting natural resources (land, water, forests), and relying heavily on labour and chemical factors of production (fertilizers and pesticides) without much concern over sustainability.25

Benefits from poverty reduction are no longer being seen, and existing benefits primarily reach the Kinh majority, and those in urban and plains areas. Inequalities between different regions have been growing; poverty is increasingly concentrated in communities of ethnic minorities and landless people.28 In addition, economic success has come at an environmental cost, such as deforestation, depletion of natural resources and biodiversity, land degradation and water pollution.29 Such consequences seriously challenge Vietnam’s ability to achieve the SDGs by 2030.30

The agriculture sector currently faces a number of new opportunities and challenges. While international integration and changing consumption patterns has opened up domestic, regional and international markets, there are increasing concerns over ethical food production,31 and food safety and origin.32 Yet there is a continuing drive to push development through the agri-industry sector, and technological innovation is seen as a tremendous driving force to counter limitations in natural resources, increases in labour costs, and low capital investment.33 Climate change and related environmental issues are a continuing challenge, with adverse impacts on production requiring suitable adjustment and adaptation.34 Being well aware of the situation, the Ministry of Agriculture and Rural Development (MARD) has been integrating climate change mitigation and adaption into all of its plans and strategies, including Program Framework for Climate Change Adaptation in the period 2008-2020, Climate change Action plan for Agriculture and Rural development in the period 2016-2020, Green growth Action plan for Agriculture and Rural Development to 2020, and most recently MARD’s Implementation action plan for Paris Agreement on climate change in the period 2021-2030.

In addition, the Government of Vietnam introduced the Agricultural Restructuring Program (ARP) in 201335 and an updated plan 2017,36 aiming to promote economically, socially, and environmentally sustainable development. The ARP promotes the transition from quantity-oriented production to demand driven and high value-added agribusiness at low environmental cost. In other words, the program aims for the sector to “gain more from less”,37 referring to gaining economic value but requiring less natural and human capital. This will require greater efficiency in land and water use, a shift toward more knowledge- and skill-based agricultural practices, better realized economies of scale and scope within value chains, and marked shifts in the function and performance of the government. This transition needs broader economic reforms including changes in macro- and sectoral policies (e.g. land use) and institutions (e.g operation of SOEs, banks, and institutions associated with science and technology), multi-stakeholder inclusion and government decentralization and coordination.38