During revolution and national unification, the Vietnamese government nationalized agricultural and forest land throughout the country. While agricultural land was de-collectivized in the Đổi mới reforms since the mid-1980s, the majority of forest and forest land has continued to be managed by state enterprises. 1. A State Forest Enterprises (SFEs, lâm trường quốc doanh) are allocated large areas of state-managed land for the purposes of forest management, timber logging and food production. In 1986, there were a total of 413 SFEs nationwide; after a 2003 reform, the number reduced to 164 in 2014.2 These enterprises controlled a total of 6.3 million hectares of forest land in 1986.3 By December 2012, both State agricultural and forest enterprises managed 2.852.330 hectares.4 For most SFEs, direct state management has been replaced by management boards with mixed government and individual ownership, a superficial change that has been critiqued as “old wine in new bottles” (bình mới, rượu cũ). 5 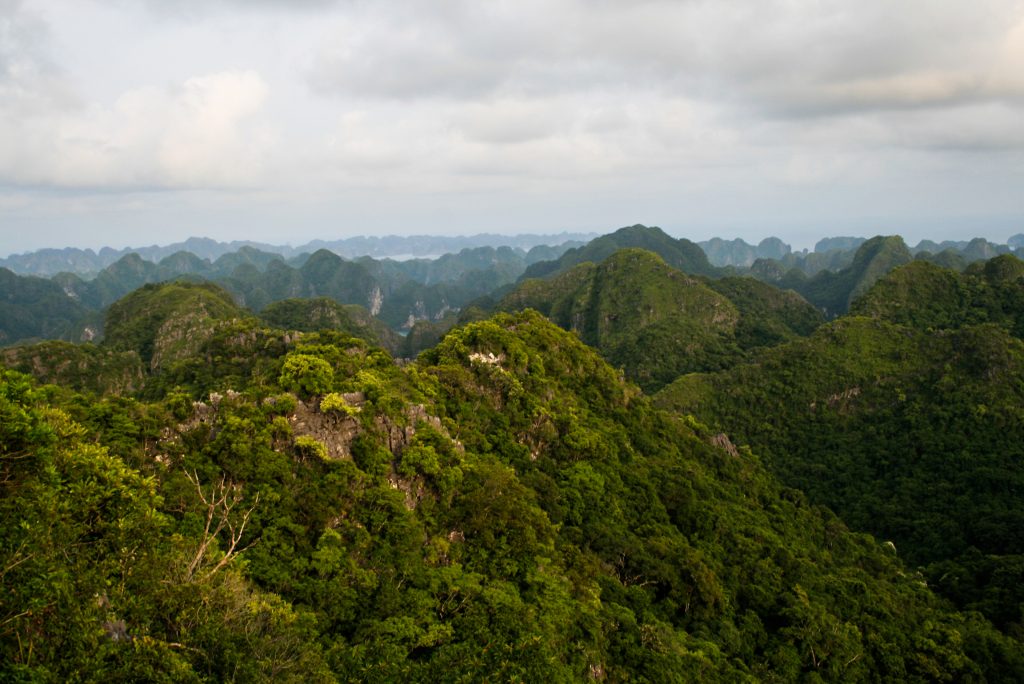 View of the Vietnam landscape. Photo by Terry Sunderland/CIFOR  via Flickr. License CC-BY-NC-ND.

Forest land in Vietnam is divided into three main categories: special-use forests (rừng đặc dụng) such as in national parks and nature reserves; protected forests (rừng phòng hộ) maintained for environmental purposes, such as watershed protection; and production forests (rừng sản xuất) that is used for production of timber and other forest products.6 Government management of forest land has historically resulted in low participation of local land users due to the lack of incentives for forest protection and development. 7 Most SFEs were poorly managed, had no investment capital, and lacked business and production capacity.8 As a result, many SFEs perform their production and management functions through short-term or seasonal contracts (eg, reforestation, weed clearance) with individuals. The contracted land users receive payments for forest environmental services (PFES) at low rates, with no accompanying land usage rights. 9

The Vietnam Forestry Administration, a department of the Ministry of Agriculture and Rural Development (MARD) and its provincial counterparts have made repeated efforts to re-allocate unproductive or under-used land from SFEs to local communities.10 These efforts have been complemented by civil society advocacy via two community-based networks, the Forest Peoples Land Rights Network (LandNet) and the Forest Land Coalition (Forland).

As of 2015, 26% of forest land has been allocated to individual households and 2% to collective community management.11 However, some community members complain that the land they are allocated is of poor quality, inaccessible from their villages, and/or entirely lacking in existing tree cover, making it next to impossible to earn a sustainable livelihood from forest management alone. SFEs, in spite of their recognized inefficiency, have been able to keep much of the best forest land for themselves.12 Individual forest users have very restricted rights to harvest timber; communities allocated forest land may use forest resources for their own public purposes.13 Compared to other types of land, forest land usage rights remain the most restricted.

State forest management directly relates to customary tenure by ethnic minority groups in Vietnam (see Customary and Communal Land Practices). For many ethnic communities, the formation of SFEs has meant the end of customary tenure arrangements, leading to exclusion from traditional lands used for agriculture, hunting, and collection of non-timber forest products. Despite a near-consensus among policy makers on the need to change the SFE system, conflicts over forest land between SFEs and local communities are still common occurrences.14 These conflicts cover a significant portion of the 2.2 million hectares controlled by SFEs. One enterprise alone (Dong Bac Company in Lang Son province) reports conflicts covering over 17,000 ha.15 Community resentment of SFEs is driven largely by the need of access to productive land, rather than access to timber. Land conflicts demonstrate villagers’ insecurity over subsistence and deeper frustrations with the state-managed economy.