The Vietnamese Government recognizes 53 ethnic minorities1 Other counts suggest the existence of more than 90 groups, amounting to approximately 10 million people, or nearly 10% of Vietnam’s population.2 Most ethnic minorities inhabit remote areas of Vietnam and have their own belief systems which are heavily tied to land. 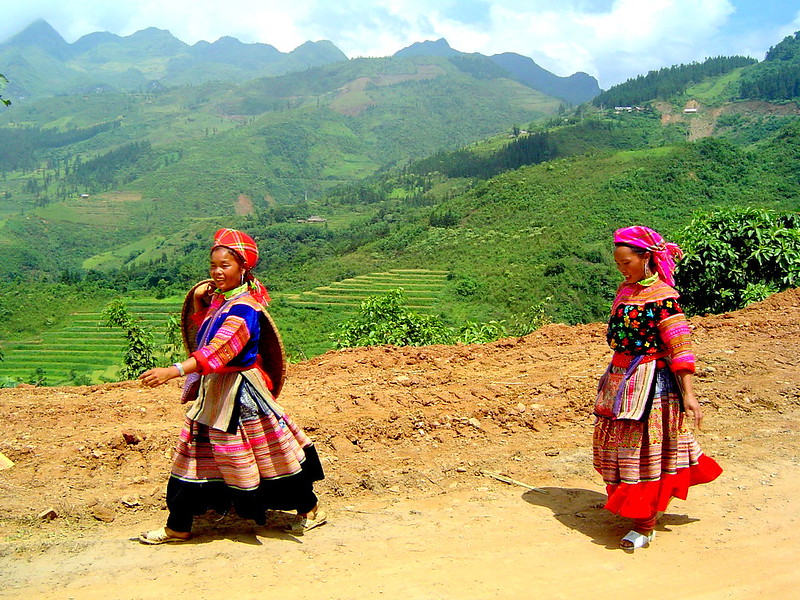 The Government has introduced a system of policies to incorporate ethnic minorities in the national development process, amounting to over 100 legal documents enacted by more than 10 state authorities since the 1980s.3 The “Master Plan on Socio-economic Development of Ethnic Minorities and Mountainous Areas 2021-2030” unifies these policies.4 The implementation plan was issued by the Government in 20205 and the corresponding National Target Program is currently being drafted. However, there remain debates on whether these policies are representative of the needs of ethnic minorities. 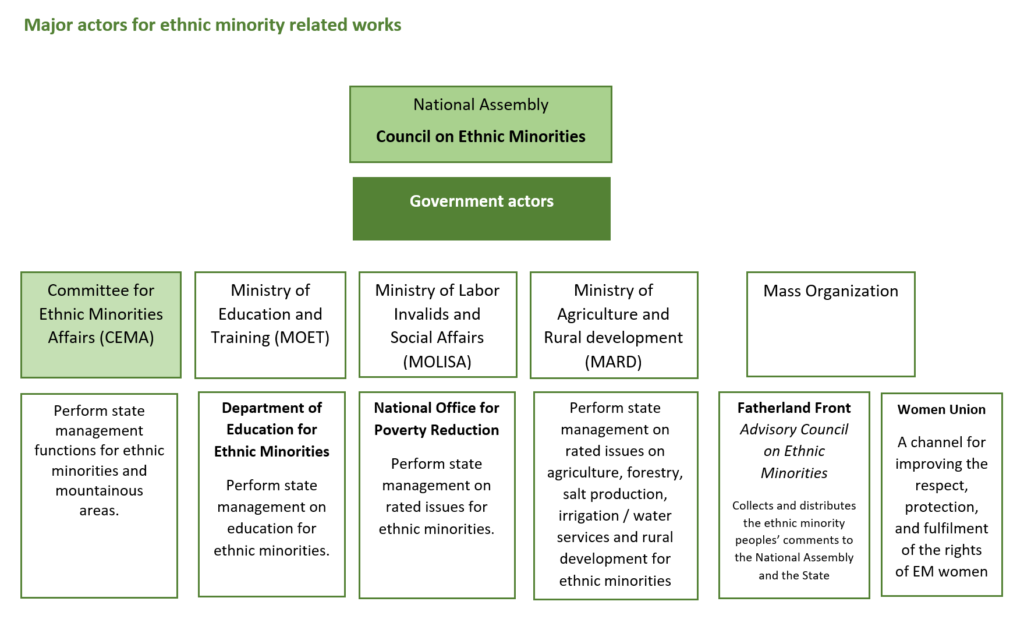 The Constitution of Vietnam recognizes the rights of ethnic minorities “to use their own language and writing, to preserve their ethnic identity and to nurture their fine customs, traditions and cultures”. Each person has “the right to self-identify ethnically, use their mother tongue and select language for communication”.

Development objectives with reference to SDGs

The Government of Vietnam’s Committee for Ethnic Minorities Affairs (CEMA)9 has identified specific targets to help achieve the SDGs.10 However, research11 suggests that these targets ambitious. The 2019 survey on the socio-economic situation of 53 ethnic minority groups of Vietnam (with results expected in 2020) may help provide further guidance.

The CEMA, a ministerial-level agency, is responsible for unified state management of ethnic affairs in Vietnam. CEMA has line agencies in most of the provinces and in geographically strategic areas or areas with an ethnic minority population of 5000 or more. CEMA has representatives down to the district-level.12 The state level agency requires a minimum representation of ethnic people. However, at commune level, qualitative analysis indicates that despite a relatively high presence of ethnic minorities, most key positions are held by the Kinh with higher qualification. This might put ethnic minorities at a disadvantage in terms of access to resources available from policies and other external support in communes or villages, as well as limiting the strength of their voice.13

The Government’s most recent policy on ethnic minorities, released in 2016, is the “Decision on Typical Support Policies for Socio-economic Development of Ethnic Minorities and Mountainous Areas 2017-2020”.14 In addition, a series of National Target Programs for Poverty Reduction have been implemented, in which ethnic minorities are the main beneficiary group (Program 13415Program 135 phase 116 and phase 2,17 Program 30a18 and the National Target Program for 2016-202019).Recently, the NTP on New Rural Development also addresses the ethnic minorities in remote mountainous areas. The overall objective of these policies is to foster sustainable poverty reduction and narrow the gaps between ethnic regions and other regions of the country while protecting and preserving ethnic cultures and customs.

The Government’s policies and programs cover a wide range of themes:

The support has resulted in some improvements in living standards in ethnic minority areas, notably: physical connectivity, access to public services (education and healthcare), housing conditions, and access to public utilities (electricity, drinking water). However, there is not much progress in production support, capacity building, cultural development, promoting their voice, and increasing ethnic minority participation in community development.20For instance, Kinh culture and history still dominate in standard textbooks which are available only in Vietnamese. 21Large-scale dam projects and agro-industrialisation for commercial cropping have a significant impact on forest ecosystems, and associated reallocations of land have pushed ethnic minorities from a forest lifestyle to sedentary agriculture and agro-forestry production. The approach of land allocation has neglected the importance of collective forest use for religious and traditional practices of ethnic minorities.22 The donor community, as well as the government, have raised concerns about these programs, including that they may be top-down,23not based on a full understanding of ethnic minority cultures and religions,24 developed without adequate consultation with ethnic minority representatives,25overlapping,26 and inefficiently and inadequately implemented. Other critics consider that these subsidy-oriented programs do not enable ethnic minorities the right to self-determination. 27, 28 There remain large income and opportunity gaps among ethnic minorities compared to the majority Kinh people, which the Government aims to address.29 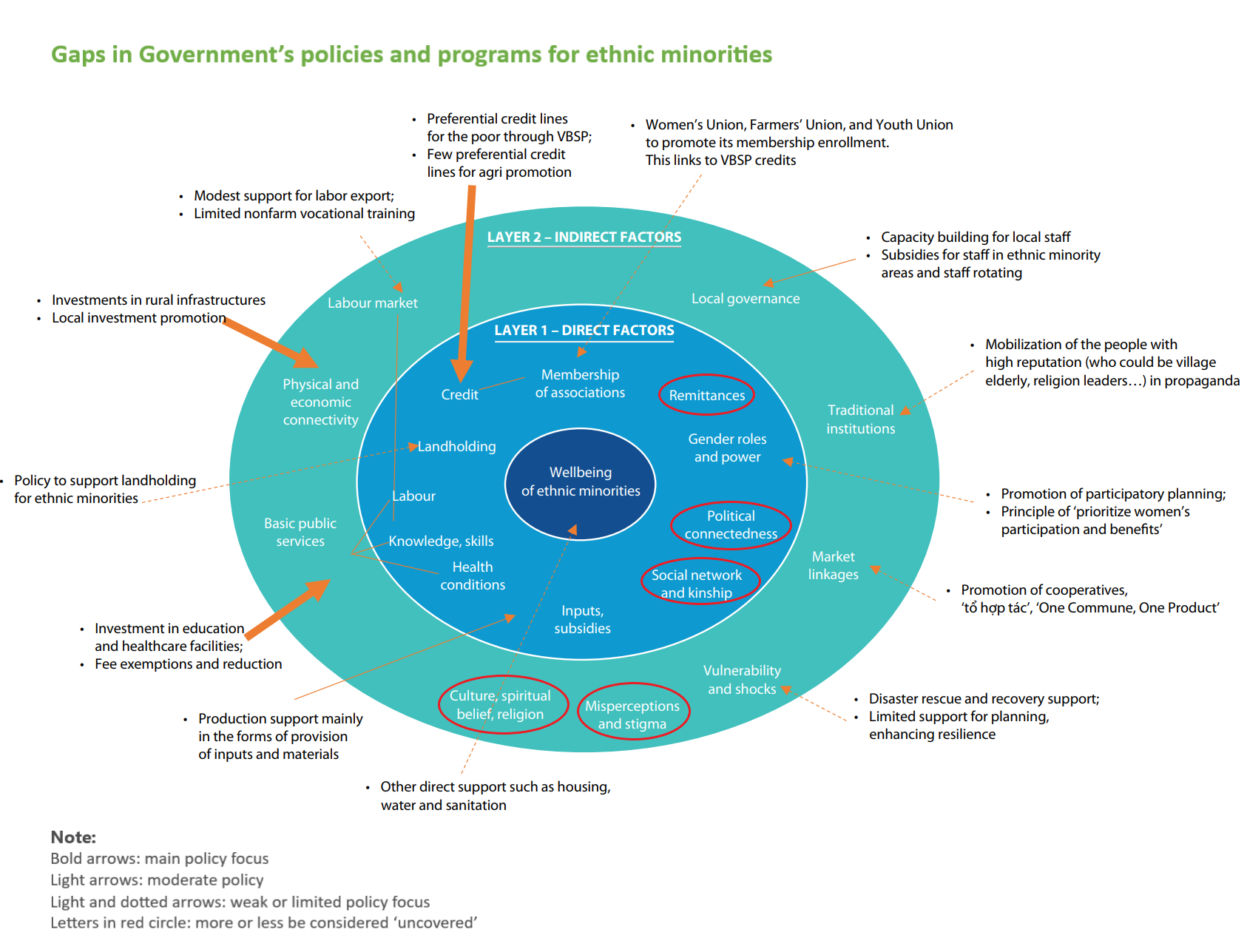 For ethnic minorities, these programs can have real day-to-day consequences. The COVID-19 pandemic has highlighted these results. For instance, a high dependence on agricultural production and low accessibility to policy benefits limits the ability of ethnic minority communities to recover from shocks. Because the pandemic has caused agricultural trade to slow down30 and informal employment to disappear,31 the resulting food insecurity and sudden poverty will be difficult for ethnic minorities to bear. In addition, the digital divide between the ethnic minority and majority people is magnified by the Government’s heavy reliance of internet and digital tools for maintaining business and education and other COVID-19 response measures.