Vietnam declared independence in 1975 after more than 1000 years of colonization, war and conflict. At this point, Vietnam was one of the world’s poorest countries. However, in a period of 15 years, Vietnam transformed from an agricultural-based society into a transitioning lower-middle income country. Vietnam began opening to the global economy in the late 1980s after a decade of operating under a centralized economy. Poverty rates declined sharply from 79.7% in 1992 to 6.6% in 2018 (US$3.2/day PPP), an average of 2.8%/year.1 The speed of this transformation outpaced its peers Thailand, Indonesia and the Philippines.2

Timeline of Vietnam achievements from unified era to Vietnam today.

In addition, the Vietnamese government began working to reduce poverty, eliminate hunger, and develop national food security in the 1990s. The country focused on developing small-scale producers, expanding agricultural production areas, increasing crops, and utilizing low-cost labor and agrochemicals. By encouraging the adoption of newly developed rice varieties and investing heavily in irrigation systems, the government successfully developed a monoculture-based agricultural system. This helped to achieve food security targets, but also led to a reduction in biodiversity as well as the use of many traditional rice varieties. Agrochemical use led to environmental problems and took away from traditional livelihood options.3

Vietnam began actively integrating itself into global trade starting in 2000 when it signed the Vietnam-US Bilateral Trade Agreement. Vietnam joined the World Trade Organisation in 2007. Vietnam also shifted toward an export-oriented economy, focusing on agriculture products, textiles, and raw materials.

Considered a success story by the international community, Vietnam lifted over 45 million people out of poverty and boosted living standards during this period. However, prioritizing growth over sustainability resulted in increasing environmental costs, including deforestation, land degradation, and water pollution.4 At the same time, the income gap between rural and urban areas and between regions widened.

Reasonable labor costs and increasingly improved business conditions has made Vietnam a popular destination for FDI.7It is also considered one of the world’s most dynamic and open economies with 16 Free Trade Agreements (FTAs)8joined, including the two “new-generation” FTAs  – Comprehensive and Progressive Agreement for Trans-Pacific Partnership (CPTPP) and EU–Vietnam Free Trade Agreement (EVFTA). Some challenges remain, including under-developed infrastructure and slow public sector reform, while the banking system and business environment could be further improved.

Vietnam is now focusing on sustainability in agriculture and forestry, developing climate change adaptation and resilience,  and developing a sustainable value chain. However, this has not fully compensated for the prolonged adverse environmental impacts resulting from the previous periods. There remain concerns about climate change, environmental degradation, food security, and livelihoods, among other things. Balancing economic development with environmental and social considerations continues to be a work in progress.

The agriculture sector has always played a critical role in the Vietnamese economy. Prior to the 2000s, it was the backbone of the economy, contributing 33.5% of national GDP during 1986-1999 and providing primary livelihoods for the population. Since the 2000s, agricultural production has progressively decreased to 14% of GDP in 2020, employing only 36% of the national workforce,9 reflecting a progressive economic structural change over time. The services sector is now the largest contributor to national output, accounting for 41.63% of GDP and attracting 35% of the labour force in 2020. The industry sector represented 33.72% of GDP, employing 28% of the labour force in 2020. However, the agriculture sector remains important in ensuring national economic stability, especially in economic crises.10

GDP per capita grew at the high pace of 5.12% annually in 1986-2019, and increased by 7.14 times between 2000 and 2020, reaching US$2,786 in 2020.11 However, compared to its neighbouring countries, this absolute number remains low due to several reasons including: low starting point in the 1980s; stalled and outpaced productivity; and a widening gap between the rich and the poor in the past decade.12

Vietnam posted a slight trade deficit from 1990-2011, but this shifted to a surplus during 2012-2019. Total trade, exports and imports have grown rapidly, at 18% annually during 1991-2019. In 2019, total trade reached a record value of US$51 billion.13Vietnam rose from 39th place in 2009 to 23rd place in 2019 among the world’s top 50 merchandise traders. This improvement was primarily due to the nation’s active participation in global value chains, particularly in manufactured goods.14

Compared with other developing markets in the region, Vietnam is a leader in low-cost manufacturing and sourcing besides China. However, Vietnam mainly does outsource work with little value-addition, placing it in a “cheap labour” trap.

Foreign Direct Investment is another driver of Vietnam’s economy, attracting capital and expertise to value-added industries in Vietnam. A total of US$154.5 billion has been disbursed, accounting for about 20% of total investment in Vietnam’s industry in the last three decades.16The manufacturing and processing industries have replaced mining as the primary beneficiaries of FDI.

Debt has helped Vietnam raise funds for socio-economic development. Over the last ten years, public debt in Vietnam has grown significantly, peaking at 63.7% of GDP.17In recent years, the Vietnam government has managed to decrease this figure below the 65% statutory limit to 43.4% of GDP in 2019 and 46.6% in 2020. This slight increase in 2020 was mainly due to the introduction of a fiscal stimulus package of US$12.03 billion (or 3.4% of GDP) to help offset the COVID-19 pandemic’s effects.18However, around 40% of Vietnam’s debt has medium or long-term maturity – a significant risk considering 40% of that debt is in foreign currencies and represents a currency risk.19

Private sector debt is also overgrowing, reaching 137.9% GDP by the end of 2019. This exceeds other countries at a comparable stage of development.20

The Vietnamese Dong (VND) has depreciated by 30% against the US dollar over the last ten years. Inflation (measured by the consumer price index) has also been volatile, peaking in 2008 with 23.12% and again in 2011 with 18.68%. Therefore, the State bank and Government have worked to manage inflation using monetary policy since 2015. By 2020, inflation reached only 3.23%. 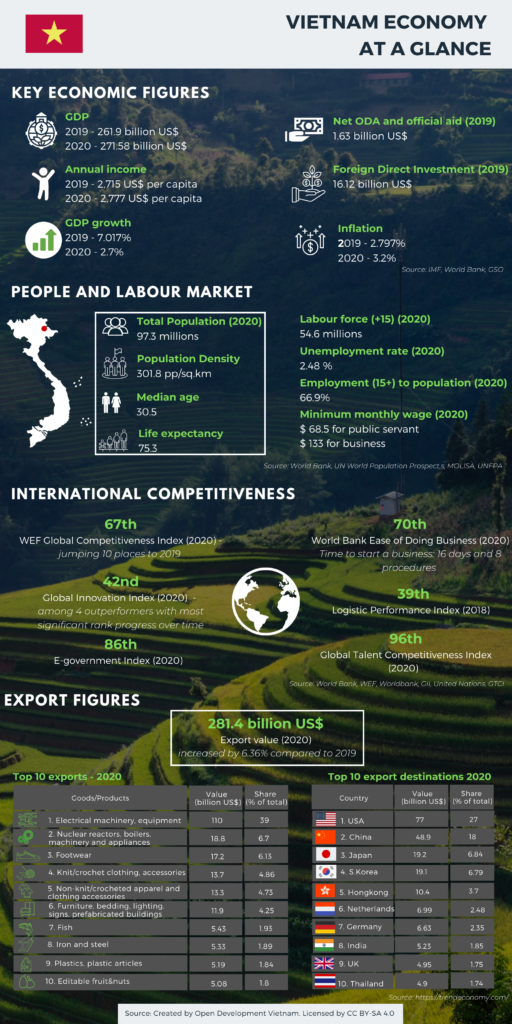