International aid plays a significant but decreasing role in Vietnam’s national expenditure. For example in 2013, official development assistance (ODA) as a percentage of the national budget had decreased to 11.2% from 25.4% in 2003.1 The nature of development assistance has changed a lot over time. Previously aid came largely from developed countries members of the OECD Development Assistance Committee (DAC), however recently, China, Arab countries, multilateral organisations, and private philanthropy is having a larger influence on how aid is accessed in Vietnam.2 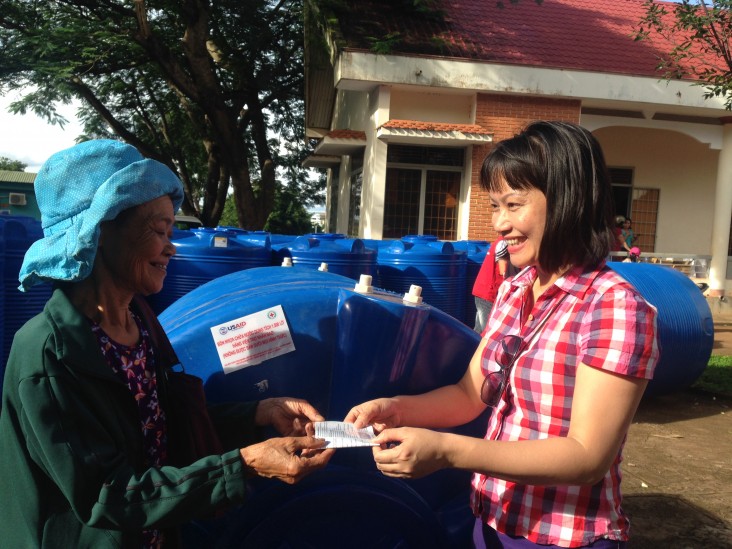 ODA being used to support drought affected people in the south of Vietnam: Source USAID/Vietnam. US Government Works License.

The definition of (ODA) has always intended to be concessional and in the form of grants or ‘soft loans’ aimed at improving the welfare of developing countries, rather than having a commercial or security focus . However, due to lessons learned about aid dependency, the negative impacts of aid projects that lack of local ownership, financial aid has increasingly decreased this concessional component. However, from 2018 onward, the way ODA is recorded will evolve to reflect only the grant equivalent, rather than the total amount of finance provided in a process called ODA modernization that will more accurately reflect these aims.3

Since the “Đổi Mới” reforms in 1986, Vietnam’s economy experienced breakthrough economic growth from being one of the world’s poorest countries to lower middle income country by 2009, with a GDP per capita of US$130 per capita to $ 1,100 per capita, respectively.4

The focus on large-scale infrastructure continued between 2011 and 2015, with key national projects funded by ODA including: the Noi Bai to Lao Cai and Ho Chi Minh City – Long Thanh – Dau Giay expressways, the Vinh Thinh and Nhat Tan bridges, and a connecting road between terminals at the Noi Bai International Airport.6

While transport infrastructure has improved in Vietnam, ODA has often been prioritised for urban projects such as national highways rather than rural roads. Corruption has also been known to reduce how effectively development assistance is able to benefit citizens, even on projects implemented through reputable development partners.7, 8

Since 2000, ODA to Vietnam has steadily increased only starting to decline very recently. Despite this, in 2015, Vietnam still received the third highest amount of ODA, globally behind only Afghanistan and India.9

In 2009, Vietnam had 51 donors, of which 28 were bilateral and 23 multilateral. In addition, support was also provided by non-DAC donors, through south-south co-operation mechanism, as well as other private sector support.10

The World Bank and the ADB are typically is the largest contributor of by multilateral organizations, with US$20.1 billion and US$14.23 billion provided between 1993 and 2012, respectively.11

However, bilateral donors account for approximately 60% of all ODA provision in Vietnam. 12 Between 2000 and 2016, Japan was the largest provider of this type of assistance with US$15.03 billion provided. South Korea was second with US$1.5 billion, followed by the USA and the Netherlands, with US$994 and US$474 million, respectively.13

More recently, China’s ODA to Vietnam has increased significantly. It is provided almost solely in the form of low-interest loans for infrastructure development. For example, China provided a US$2.189 billion worth of concessional loans during the period between 2011 and 2015, with only US$15,000 worth of grants for humanitarian aid.14

China’s development assistance is sometimes perceived as a political tool, lacks transparency and does not appear to conform to international standards for ODA.15 Over the 13 years between 1992 and 2004, China provided concessional loans worth US$312 million to Vietnam. This was dwarfed, however by the US$10,385 million provided over the six years between 2005 and 2010 and this has only increased further more recently.16

Over the past two decades, Vietnam been able to develop its capacity to disburse ODA. Previously international donors would commit to and sign agreements to provide aid, that was not implemented. For example, between 2001 and 2005 US411.24 billion was committed to Vietnam but only US$7.887 billion was disbursed. However, between 2011 and 2015, this had improved significantly with US$27.78 billion committed and US$22.32 billion disbursed.17

This improvement has brought benefits to the people of Vietnam. For example, between 2011 and 2015, ODA disbursements and concessional loans accounted for only 3% of Vietnam’s GDP, but 8.6% of all investment in social capital, comprising 47.3% of the total social investment from the state budget.18

Vietnam now performs relatively well in terms of the successful acquittal of development funds,  19 with problems now mainly associated with bottlenecks within major infrastructure projects, rather than other capacity issues.20

It is expected that Vietnam’s level of ODA will continue to decrease slowly into the future coming with the transition to a middle income country status.23 Some donors now transfer development assistance directly to partnerships with universities, research centres, and social enterprises or NGOs, while others are withdrawing assistance to Vietnam, entirely.

In response, Vietnam has outlined a national plan to prioritise its needs for development assistance.  The country has suggested US$39.5 billion is required between 2016 and 2020, with US$21 billion intended to be used by the central government and US$18.5 billion for the local implementation of 1,203 selected projects.24

If accessed, this will result in a public debt related to ODA and concessional loans at the end of 2020 of US$55 billion accounting for 26% of total public debt and 15% of GDP.25

Vietnam has assumed a greater control of ODA expenditure and the role of foreign NGOs, since 1996, through a range of legal mechanisms intended to  better co-ordinate aid efforts and disburse aid to the sub-national regions more equitably.26, 27, 28

However, a clear legal framework for local NGOs has still not eventuated. The Law on Associations has been drafted for some time but has still not been approved by the National Assembly.29 As a result, the activities of local NGOs in the country tend to be more fragmented.

ODA and the SDGs

Moving forward, global development strategies such as the Sustainable Development Goals are expected to also have a significant influence on the use of ODA in Vietnam. Overall amounts of ODA are expected to decrease, with private sector mechanisms related to global public goods such as forests and climate change adaptation, being used more frequently.30

The demand for financial capital to address social issues is likely to increase and result in economic growth in Vietnam from a GDP of $200 billion in 2015 to over $300 billion by 2020. Between 20 and 25% of he capital required to drive this growth is expected to come from concessional loans from ODA.31