Vietnam’s agricultural policy began with a focus on reducing hunger and poverty through shifting away from subsistence agriculture to commercial agriculture (1986-2000). From there, a period of diversification began (2000-2008), and included promoting agricultural and rural industrialization and modernization.1 Now, sustainability and resilience are the focus of the government’s approach (2008-present). The government is aiming for a sustainable, environmentally-friendly and high value-added agricultural sector which can generate more economic value with less environmental and human cost.2 The key strategies introduced by the Central Party Committee confirms that agriculture, farmers, and rural development continue to be integral components of the plan, albeit done sustainably.3

In 2010, the government also established a rural development strategy, implemented through the National Targeted Program on New Rural Development (NTP-NRD).4 Implementation is divided into five year periods, and is currently entering its third period. The program is considered by the Government to be a long, regular and continuous process, with a beginning but no end.

About the National Targeted Program on New Rural Development

The NTP-NRD is intended to support the more than 9,000 communes across the 63 provinces of Vietnam to upgrade services and infrastructure in their communities, raise their incomes and productivity, and reduce the still significant socio-economic disparities between rural and urban areas in Vietnam.

The plan focuses on 11 activity groups with 19 criteria,5 measuring change relating to poverty, education, health, transport, water supply, irrigation, livelihoods, agricultural production, markets, culture, energy, environmental issues, communication, and security. Communes are intended to assess priority needs  against these indicators and create plans to meet the indicators. The program supports this work by, in principle, channeling the necessary funding to meet these needs.6

Since its launch, the program has attracted a total of 2,967,057 billion VND (equivalent to approximately 13.48 billion USD/year). Resources for new rural development have been pooled from different sources. During the first phase (2011-2015), funding and implementation by many communes was directed primarily to achieve infrastructure targets. In addition, the program gained in enhancing local level planning, especially where donor-supported projects were implemented. However, there were limitations in management and operations.7 Budgets were directed to improving this in the second phase (2016-2020), alongside raising incomes, productivity, value addition, and enterprise creation.

Implementation of the NTP-NRD is decentralized, with budget decisions for what needs to be done taken at the provincial, district, and commune levels. Government budgets8 indicate that this is indeed the case, as capital spending (or spending on assets, land, stock, or intangibles) was made mainly at the local level.9 The capital spending focused primarily on essential infrastructure works such as rural transportation, schools, cultural facilities, irrigation, and potable water systems. Central government spendings focused on recurrent spending which was dedicated to production and value chain support, vocational training, capacity building, communication, monitoring and evaluation, maintenance, education, and environmental sanitation.

The NTP-NRD in its first decade 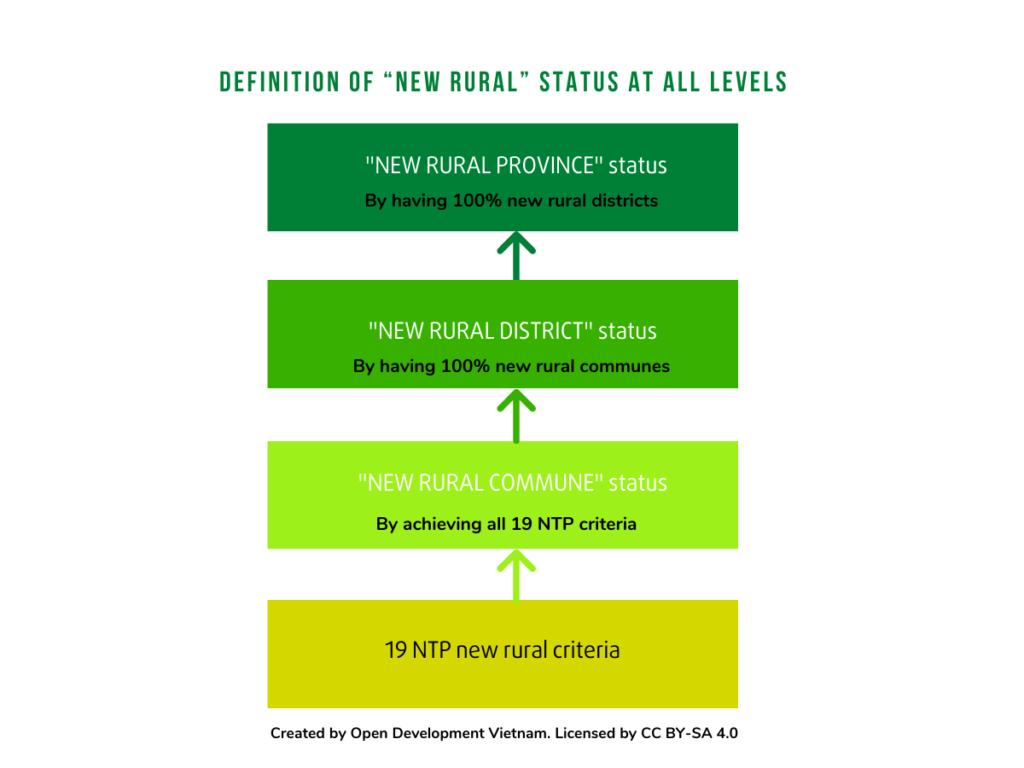 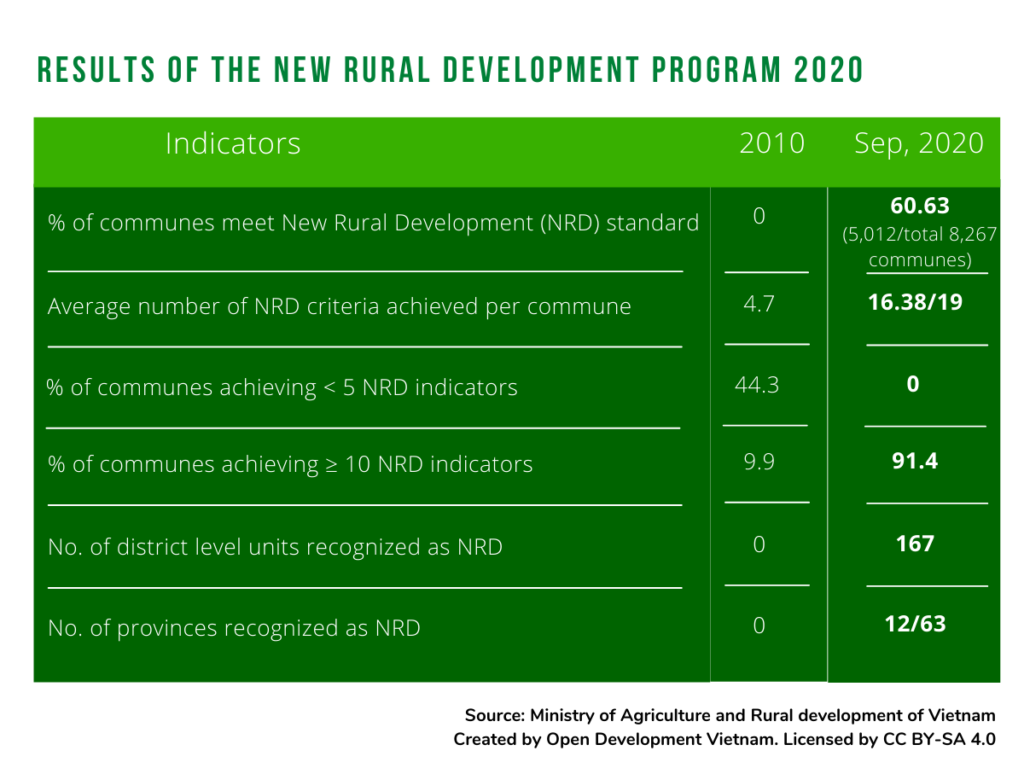 Overall, the last ten years of the NTP-NRD has been successful, with government targets met, external markers achieved, and satisfaction from communities themselves. Notably, the government reports that 84.78% of rural households were satisfied with construction related to the NRD in their community.11 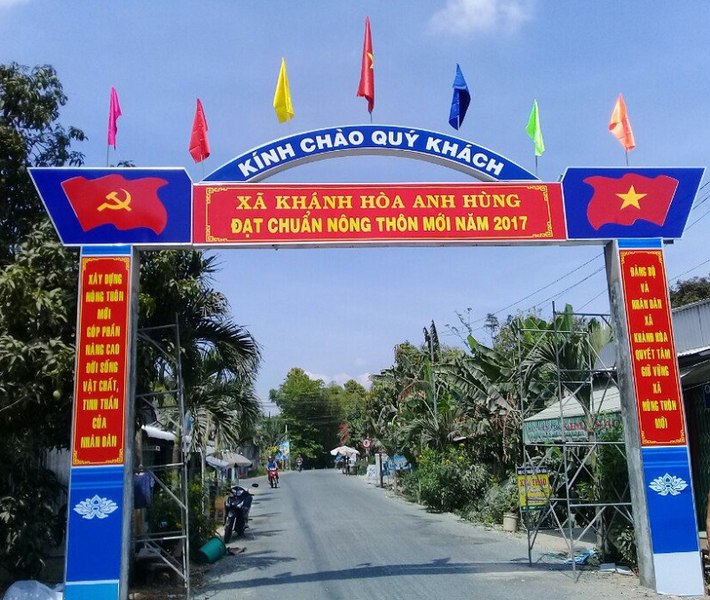 Photo: A newly built gate, recognising “new rural commune” title achieved. The NTP-NRD has contributed to changing the appearance of rural areas over the last ten years. Sourced from Wikipedia.

Due to the NTP-NRD, the urban-rural development divide has gradually narrowed.12 Rural income increased by 2.78 times during 2010-2018, while poverty in rural households decreased, from 17.35% in 2010 to 5.9% in 2019. The rural economy has continuously grown, shifting away from agriculture towards industry – service. The percentage of labourers that are agricultural workers has decreased sharply from 48.2% to 38.1% from 2010-2018. In 2019, income from agricultural, forestry and fishery activities accounted for only 22% of rural households’ total income.13 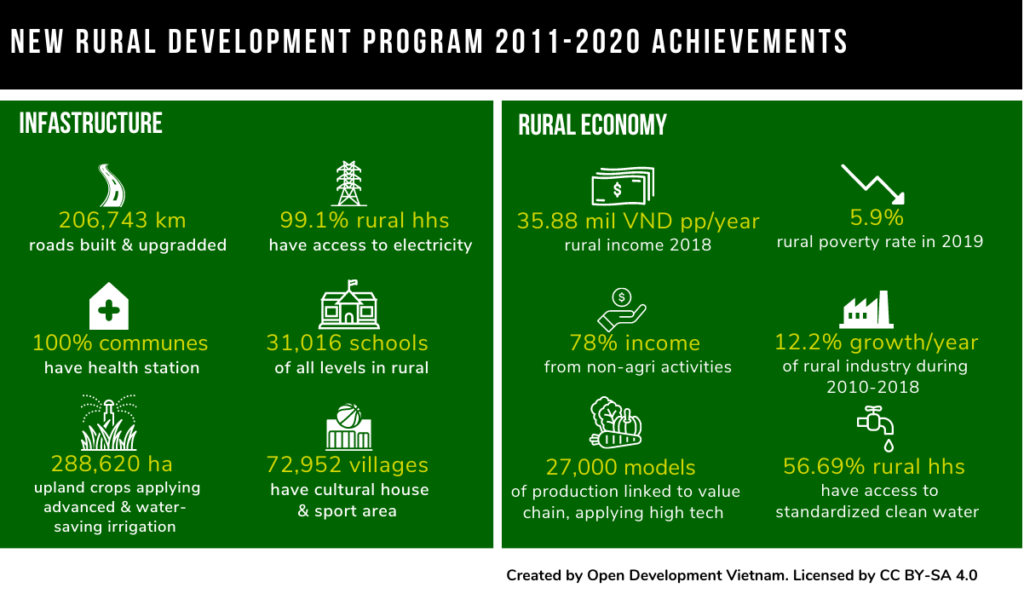 The most outstanding achievement of the program has been infrastructure development.14 Transport infrastructure has developed rapidly, meeting the travel and transportation needs of those in concentrated large-scale production areas, as well as remote and isolated areas where primarily ethnic minorities live.15 In fact, 45 million m2 of land was voluntarily donated by people to build roads and other shared infrastructure.16 In addition, newly developed irrigation systems have improved agricultural production value.17 The program has also focused on investing in electricity supply for households without electricity in communes that are remote, in geographically difficult areas, at the borders, and on islands.18 The rural school and health system at all levels have also been given special attention.19 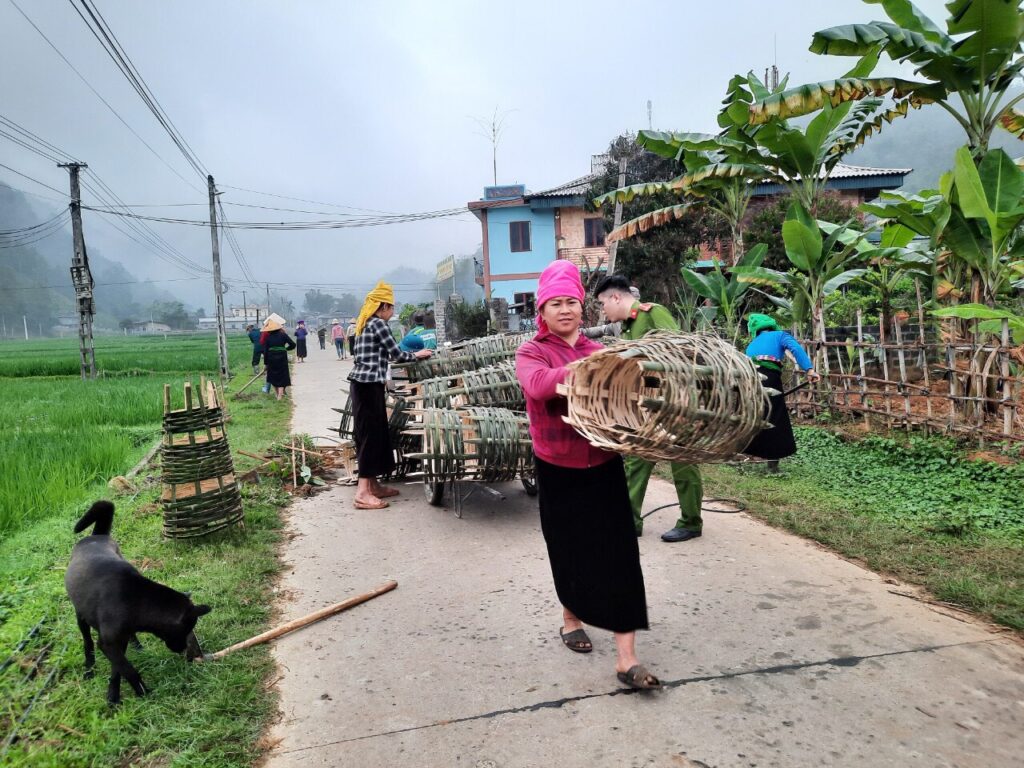 Overall, “New Rural Commune/District/Province” status has become highly desirable as a political target for provincial leaders, and has turned into somewhat of a competition throughout the country.20

Despite national-level achievements, the level of benefit from the NTP-NRD ranges at the local level, especially in the Northern mountainous areas, Central Highlands, and flatlands of the central areas – all primarily traditional ethnic minority lands. The proportion of rural communes in mountainous and ethnic minority areas that have met the new rural standards is lower than the national rate (44.8% versus 55.6%). These communes have also, on average, achieved a lower number of NRD criteria compared to the national average, at 14.87/19 compared to 16.38/19. Even for those communes who have met the criteria, the benefits have not been sustained, as the infrastructure has degraded.21However, the average poverty rate in communes in ethnic minority and mountainous areas has decreased by a rate of 3-4%/year. 22Pre-existing socioeconomic conditions, such as poor water and sanitation infrastructure and low per capita income,23 have meant that a wider gap needs to be crossed to meet NTP-NRD criteria. Geographical challenges, including long distances along complicated and divided terrain, as well as dispersed populations, have meant a very high investment rate for infrastructure projects, often 2-3 times higher than in plains areas.24Additionally, limited investment has been made in active community involvement and local capacity building.25 Nor has public spending prioritized communes with limited capacity to mobilize resources but that require large investment. In addition, the focus has been on building new infrastructure projects, with inadequate budget provision for operations and maintenance.26 One result has been an increase in water pollution, as most solid waste and wastewater (industrial and household) have not been collected and treated thoroughly.27

Further, national-level metrics – focusing solely on economic markers – do not take into account local-level needs. The government promotion of the “clean, modern, beautiful” look of asphalt or concrete road combined with brick houses takes a one-size fits all approach, regardless of mountain or coast. However, this does not fit all rural villages, where traditional architecture would blend with natural conditions. In addition, NTP-NRD development follows the order of “electricity – road – school – station”, ignoring culturally important village structure and space. Communal houses, pagodas, temples, are no longer the highlight of the village, thus breaking with cultural values. This has meant a lack of community investment in traditional architecture and culture. This can be seen outwardly, with an increase in construction density, with buildings directly encroaching on relics and heritage.28

Gender equality has been incorporated into the NTP-NRD as a sub-thematic issue (sub-indicator 18.6). However, gender is not considered in any of the remaining NRD criteria.29 In this sense, the activities of the NTP-NRD are not responsive to women’s voices and needs.

The present period of implementation is from 2021-2025. The Government emphasizes ensuring “effective, comprehensive, and sustainable” in building NRD. The program is now intended to meet the goals of sustainable development at all levels (province, district, commune, and village), while also contributing to realisation of the overarching national strategy on sustainable agriculture and rural areas.

Key priorities of the current program are as follows: