Vietnam is one of the most disaster-prone countries in the world. S-shaped with a 3,440 km coastline, its unique geographic location in the monsoon belt of Southeast Asia and diverse topography means that Vietnam suffers from many different types of natural hazards, including typhoons, tropical storms, floods, drought, salt water intrusion, landslides, and forest fires. More than 70% of Vietnam’s population is at risk from natural hazards, particularly the rural and urban poor.1

While natural disasters are normal for the region, climate change has impacted their frequency and severity globally, including in Vietnam.2 Over the past three decades, extreme weather events have caused an average of 500 deaths a year.3 With most of Vietnam’s population clustered in the coastal and low-lying delta areas, which is more easily impacted by natural disasters, Vietnam is ranked one of  five countries likely to be most affected by climate change.4 These low-lying areas are also historically good places for agriculture and other drivers of the economy, so when disaster strikes the economy is impacted too.5 The economic damage related to disaster amounts to 1% of the country’s GDP annually.6  Total cost of damage by disaster in 2020 was US$ 1.45 billion,7 or almost half the country’s export value of rice in 2020.8

Disasters do not discriminate, but people living in poverty are more exposed to and affected by the impacts of disasters. Other disproportionately affected groups include women and girls, who are typically responsible for household farming and water gathering, as well as ethnic minority peoples.9 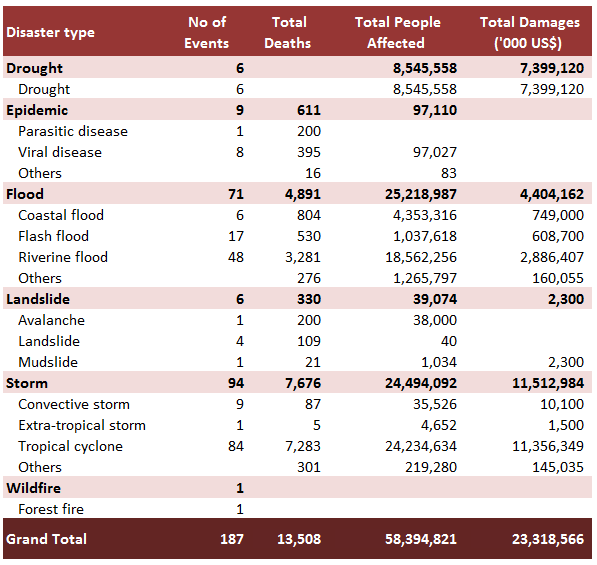 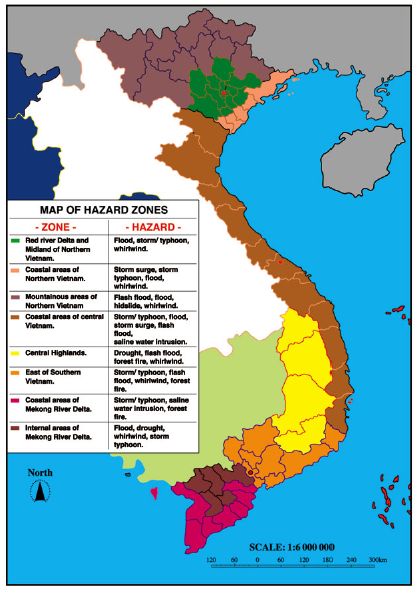 Floods account for an estimated 97% of average annual economic losses from hazards.

Vietnam’s natural geography predisposes the country to flooding, which is normal during the monsoon (June to November) and typhoon (July to October) seasons in the low-lying Red River and Mekong Delta and Central coast areas.13 This natural pattern has created the biodiversity and agricultural abundance of this region, but an increase in storm severity has increased risks to lives and livelihoods.14  It is compounded by land and soil erosion causing flash flooding and landslides which damage infrastructure, livestock, and buildings,15 increasing the vulnerability of the already less-resilient rural poor.16 In urban areas like Hanoi and Ho Chi Minh city, the impacts of floods tend to be amplified because of poor drainage systems.17

Figure 3: Location of floods in Vietnam by human losses18 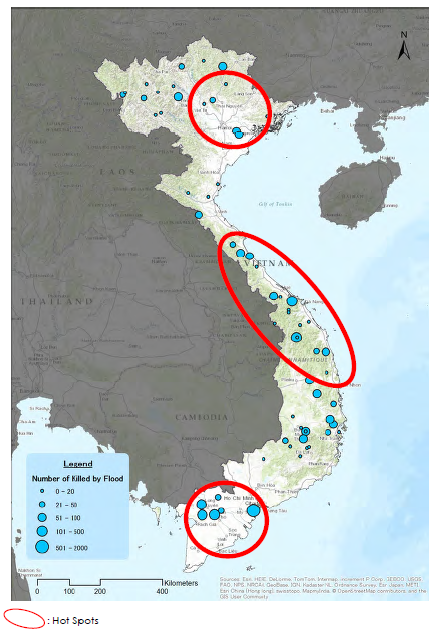 Because of its geographic location, Vietnam is very exposed to typhoons, especially along its northern coast. Their frequency has increased from an average of 5 to 7 annually since 2000. When typhoons hit land (landfall), they are usually accompanied by high tides and heavy rains, resulting in long and heavy rains and flooding. The 2020 floods in Central Vietnam were caused by nine major typhoons and two tropical depressions, leaving 192 people dead and 57 missing. Houses sustained significant damage, including collapse and loss of roofs; houses, schools, and medical facilities flooded. More than 49,930 ha of rice and crops were destroyed, while thousands of cattle and millions of poultry died or were swept away.19 Typhoons cause significant economic damage. The period of 1993–2013 saw  an average of 2.4% in annual GDP losses due to typhoons.20

Climate change interacts with typhoons creating hazards such as storm surges. Storm surges are projected to be the primary cause of economic losses in Vietnam beyond 2050. 21 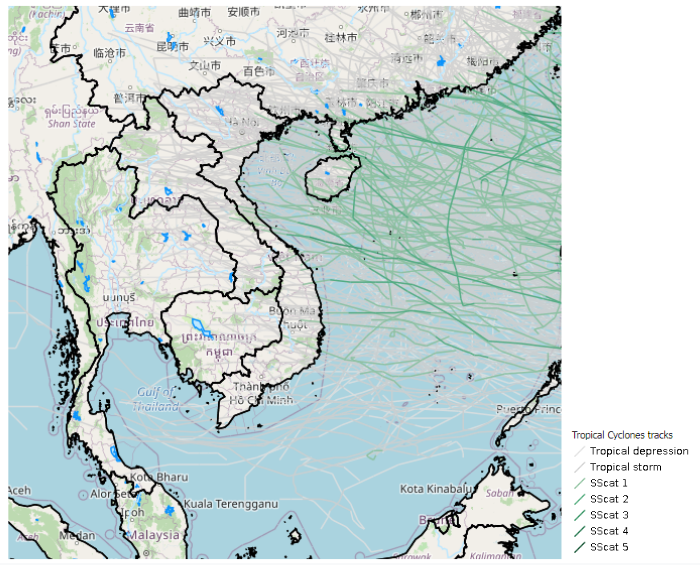 Landslides often happen in the northern mountainous area of Vietnam, mid-country near the Lao PDR border, and the coastal region. Landslides are typically triggered by heavy rain during a typhoon or tropical storm. 23 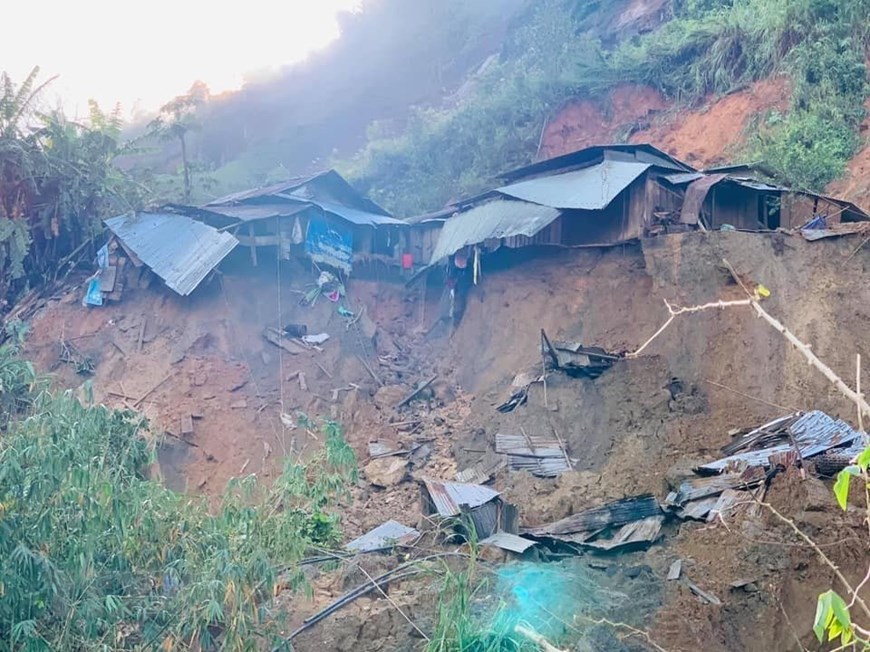 Part of Vietnam’s natural weather patterns include dry periods, sometimes in North Central region and primarily in South Central Coast, Central highland and Mekong River Delta. However, the severity and length of these dry periods has increased, with historically severe droughts recorded in 2015-2016 and 2019-2020. There are two main types of drought in Vietnam:  meteorological (usually associated with a precipitation deficit) and hydrological (usually associated with a deficiency in surface and subsurface water flow, potentially originating in the region’s larger river basins).24

Water shortages due to drought combined with saline intrusion impact both water supply and agricultural production in the Mekong Delta.  Impacts include a loss of domestic water supply, which affected about 430,000 people during the 2019-2020 drought, while limiting critical services such as hospitals and schools.25 Rice, fruit trees, vegetables and aquaculture also sustain damage and losses.26 The cost of drought can also be high: the Department of Crop Protection estimated the cost of the  2015-2016 drought to be US$ 1.5 billion.27 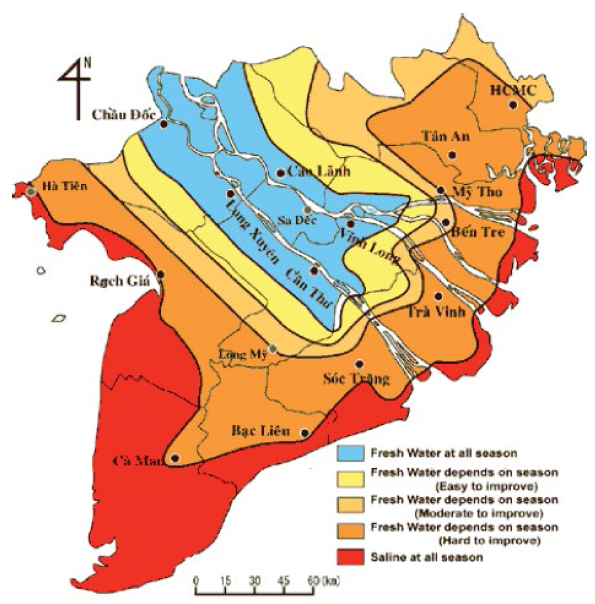 The Mekong Delta is one of the top three deltas most vulnerable to climate change and sea-level rise. However, human activities both in the delta and upstream also impact the function of  the Mekong river. Upstream hydropower dams and excessive sand mining are the main drivers of enhanced saltwater intrusion. At the same time, over-extraction of groundwater causes the ground to shift downward, and, hence, a rapid relative sea-level rise.29

Vietnam has been identified as a global “hot spot” for the occurrence of emerging infectious diseases, or diseases whose incidence has recently increased. This includes zoonotic diseases from domestic animals, wildlife or ecosystems. Recent occurrences include SARS (2003), “Avian” flu (H5N1, 2003), “Swine” flu (H1N1, 2009) and COVID-19.30

Disasters and climate change impact the prevalence of infectious disease outbreaks due to changes in the environment and human conditions, and vulnerability to existing pathogens.31

Vietnam has been aware of the importance of building resilience to natural hazards and mitigating impacts of climate change for decades. Shifting away from disaster relief and response to risk reduction, the National Strategy for Natural Disaster Prevention, Response and Mitigation Towards 2020 was approved in 2007; a new updated strategy to 2030, vision 2050 has been released in 2021. In addition, the Government released the National Climate Change Strategy (2011–2020) in 2011, and in 2018, the National Adaptation Plan (2020–2030). A national program to support community-based disaster risk management was also established.32

However, Vietnam’s disaster risk management and climate change adaptation policies, plans, and investments are fragmented. Nor are they consistently or effectively integrated into planning.33 While there are efforts for systematic improvement, short-term reactive responses often override preventative strategies, while only a few actions address structural drivers of vulnerability.34

The country has plans to improve coherence of the legal, policy and financial landscape around disaster risk management and climate change.35